It’s hard to believe that Dylan is now 17 weeks old! Since those first weeks in hospital which dragged horribly, time has just flown by. I thought I would list our baby essentials which we couldn’t have been without during these first few months. I read loads of these kind of posts while I was pregnant so hopefully it will come in useful to someone!

We have three baby slings and they have been a lifesaver for us as Dylan hates being put down! We have baby bouncers, swings and a carrycot but he will only tolerate them for a few minutes on a good day, so without the slings I would literally be stuck with no hands for most of the day. As well as wearing Dylan around the house, I usually wear him if we are going out, unless I need the pram to carry shopping. And even then I often end up wearing him and pushing the shopping home! He’s never really loved being in the pram so the sling is just easier and allows him to get a bit of a nap. 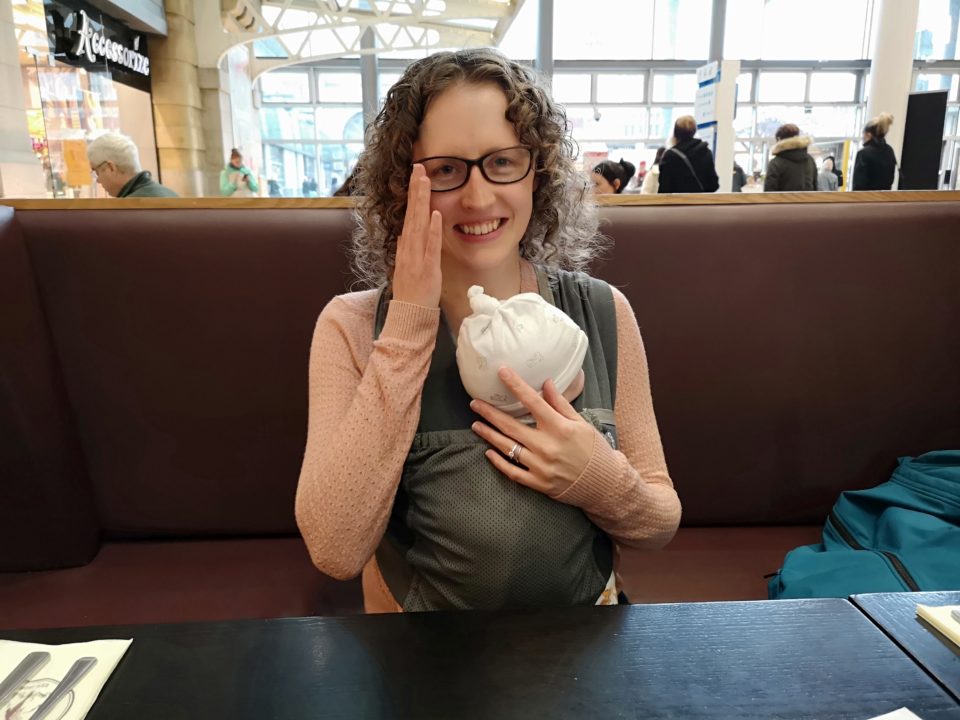 The first sling we have was included in our baby box and is one of those long stretchy pieces of material. Once you’ve mastered tying it, it’s really comfy and supports baby really well, even if they are small. I tend to wear this one around the house.

We also have the NCT Caboo which was given to me by my sister-in-law who no longer needed it. I love this one. It’s quick and easy as it’s pre-tied and you just need to adjust the straps. The downside is that it can get a bit tangled up but that’s not a deal breaker. I use this one when I take Dylan out as it’s less of a faff if I want to take the sling off when I’m out. It’s very lightweight and pretty comfy to wear and I also find it easier to get the right support for Dylan first time. The stretchy sling often requires a re-tie! I’ve been using this sling since Dylan came out of hospital so it’s suitable for small babies.

The third sling we have is the Baby Bjorn and this was also given to us second hand. I’ve only just started using this one now that Dylan is over 8lbs. It’s much bulkier than the other two but I think it’s going to be good as it’s quick to get baby in and out of. Mik is more comfortable using this sling as he thinks it feels more secure and it’s quick to adjust the straps depending on who is wearing the baby. It allows you to wear baby facing forwards when he’s bigger as well.

I resisted buying this as I’d read mixed reviews. It seems that babies either love it or hate it! After getting Dylan home, we had a couple of nights where he just wouldn’t settle in his co-sleeper. He just looked so tiny in it and we realised that while he was in the neonatal unit he’d had a Sleepyhead type bed which was much cosier for him. 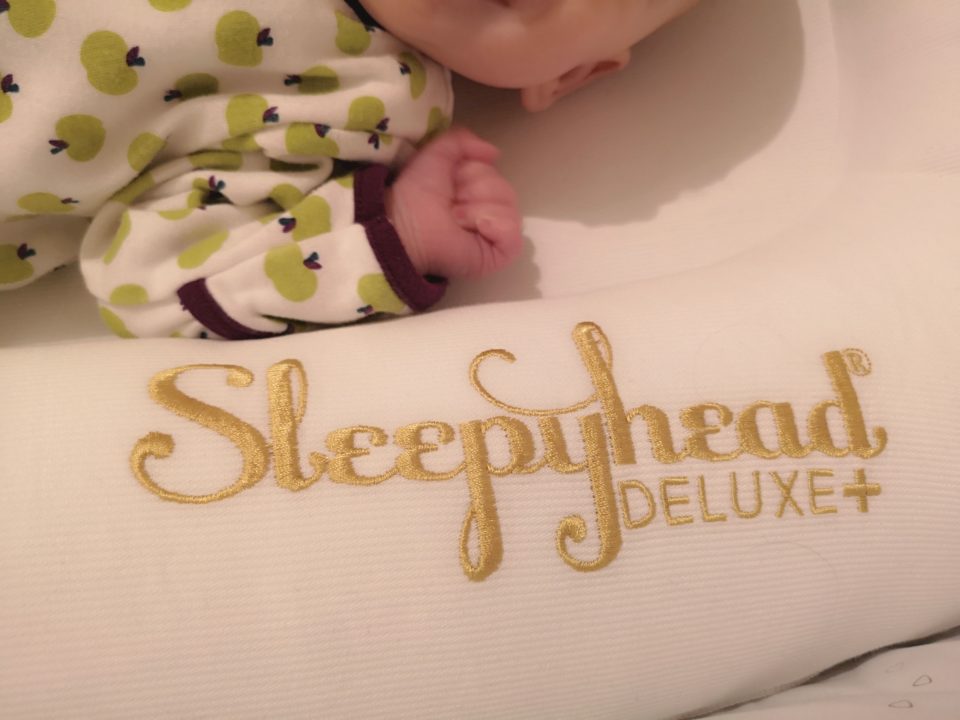 We splashed out on the Sleepyhead and since then he’s had no problems getting put to bed, as long as it’s been pre-warmed with hot water bottles and I’m going to bed at the same time as him. It’s pricey and the spare covers are also so expensive but for us it’s been worth it!

We’ve tried Dylan with both blankets and sleeping bags and he definitely prefers the sleeping bags. We’ve got a couple of Gro-Snugs which are designed for newborns. They have the option to button baby’s arms inside to give them the feeling of being swaddled while leaving room for their legs to move around.

I’ve tried keeping Dylan’s arms out but he often startles himself awake – I’m not sure what we’ll do when he grows out of these bags! They are designed for up to 12lbs so it won’t be long now. I’m just going to have to learn how to swaddle him myself – I’ve not had much luck with that so far!

There is so much hype about Ollie. I bought him because Dylan wouldn’t go back to sleep in his own bed after his first 2-3 hour stretch. I had hoped that the white noise/rain/womb noise would help him get back to sleep after a feed without him needing to sleep on me. Unfortunately it didn’t really work for that and hasn’t been the miracle product I’d hoped for but it has given us a nice way to wind down before bedtime. 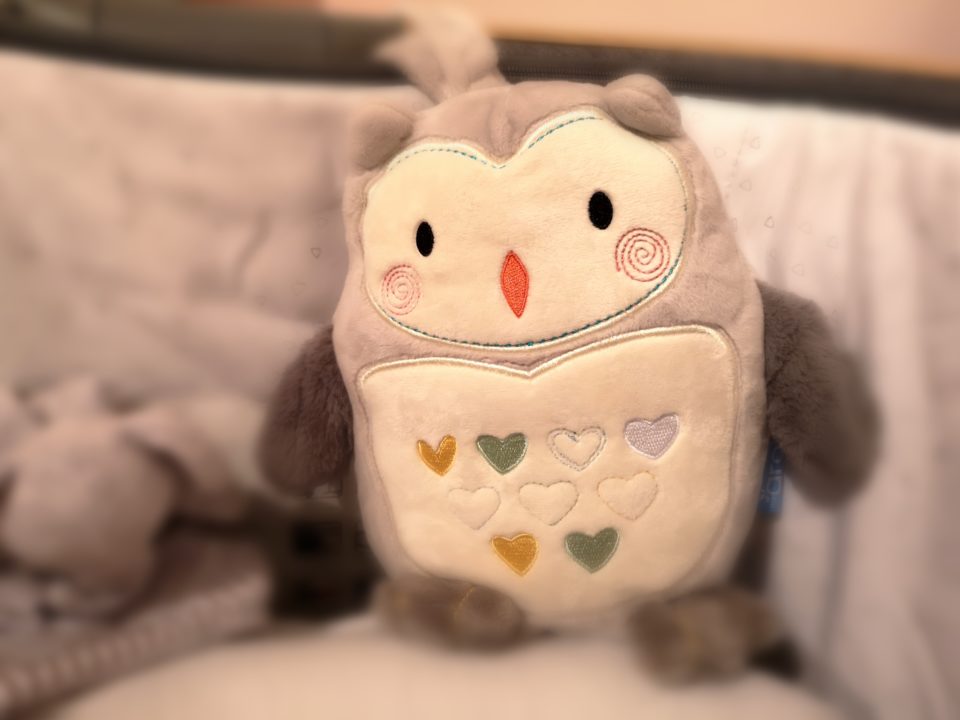 We have the lullaby playing while we do Dylan’s last feed and then sometime use the rain setting once he’s been put down in his co-sleeper. It’s very relaxing – Mik and I have both commented that it makes us sleepy as soon as we switch the lullaby on! I think Ollie will probably be more use for Dylan when he’s in his own bedroom so I will report back!

Dylan loves time on his mat! He’s had good neck control from early on and enjoys trying to crawl across the mat. He even rolled over from his tummy to his back a couple of weeks ago! He also likes lying on his back smiling up at the friendly flower and trying to bat at the other toys. 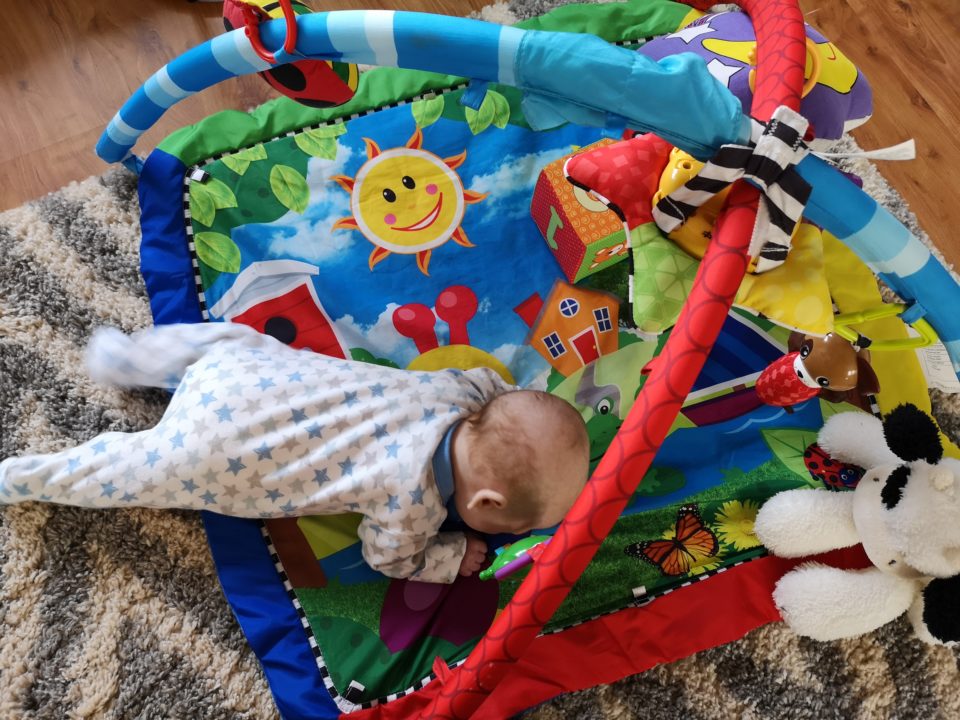 This is useful for getting the right temperature for the bath. Not a huge amount to say other than that! We have a duck thermometer in addition to the one provided in the baby box.

Dylan hates getting out of the bath. He screams the place down if he’s out of the water for more than a couple of seconds before being wrapped in a (pre-warmed!) towel. We’ve got a few hooded towels and they are so much easier to wrap around Dylan than regular towels and also look super cute! The one we have from Tilly & Jasper is my favourite as it’s so soft.

We go through lots and lots of muslins and we have so many different designs. As well as regular sized ones for mopping up sick and dribbles, I’ve got a few oversized ones which double as blankets, feeding cover ups or playmats. There are loads of pretty designs and are definitely a must have with a newborn.

Another must have are wipes. As well as the obvious nappy changes, they are useful for cleaning sticky hands or milky dribbles. We use either Water Wipes or Aqua Wipes, both of which are gentle on baby skin. 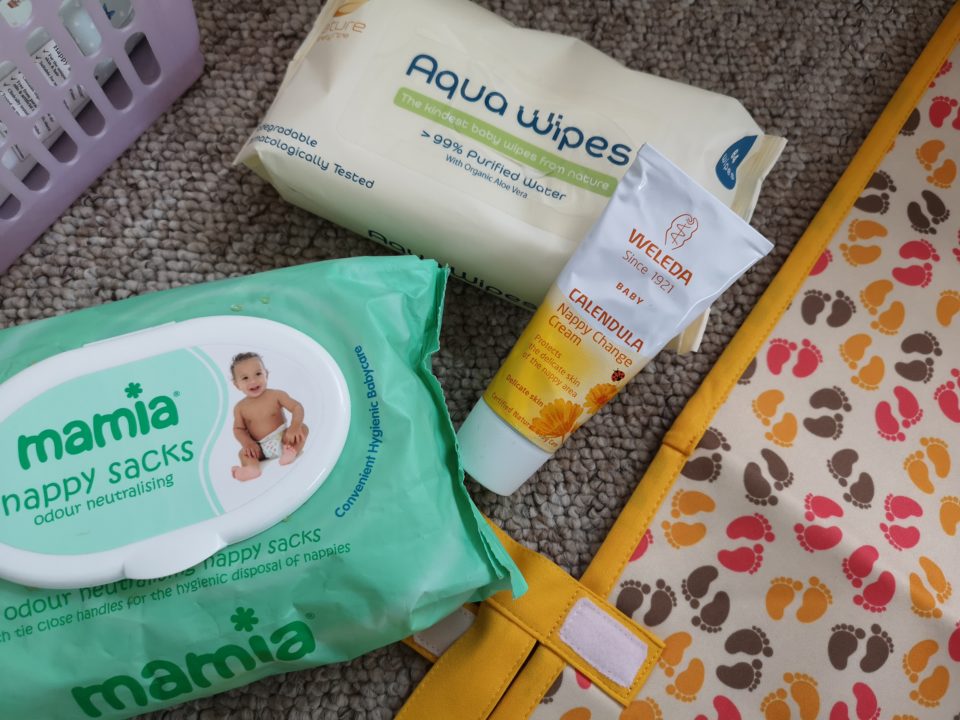 I’m sure this list of baby essentials will change as Dylan gets bigger but up until now these have been our most useful items! 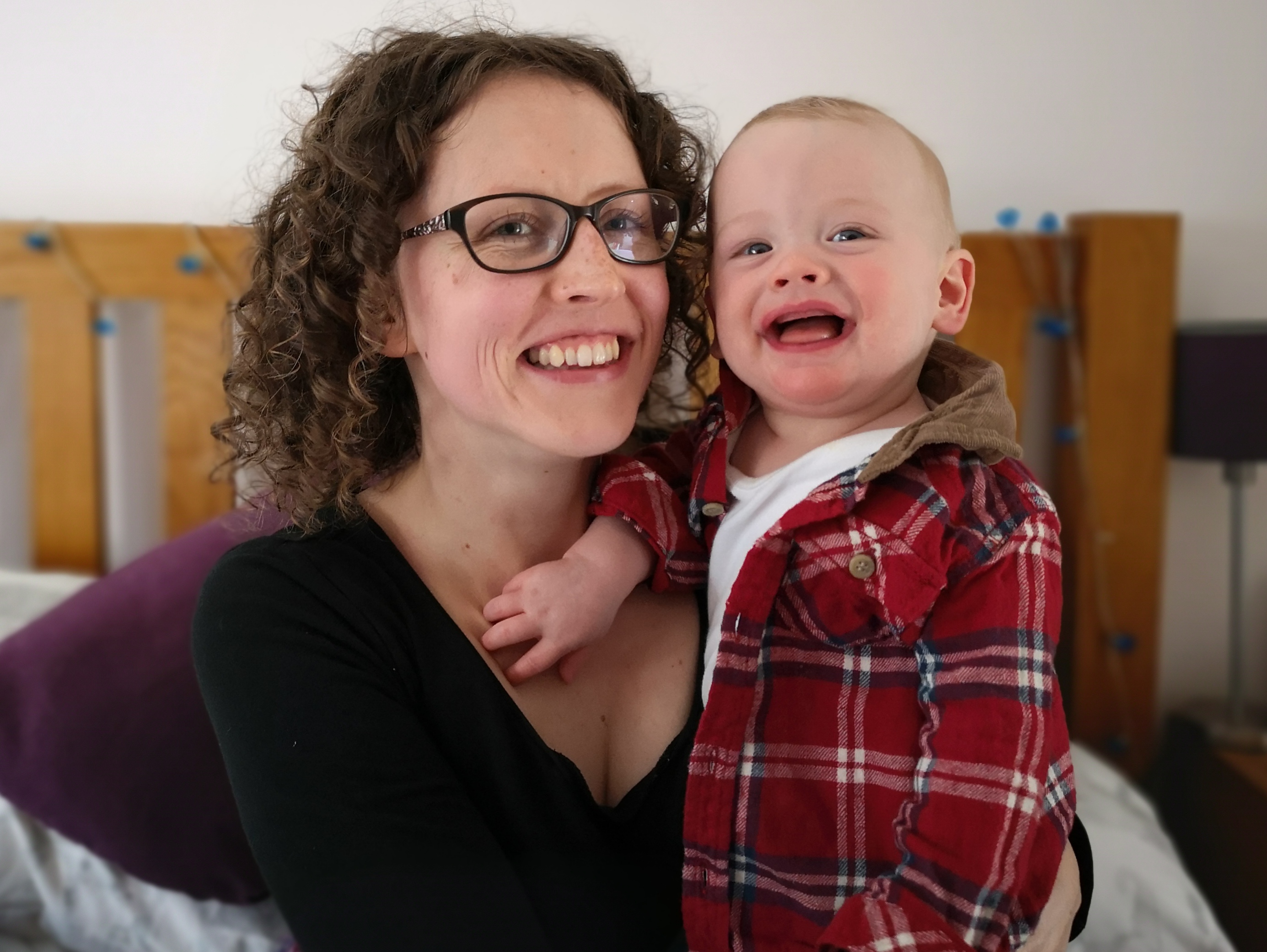 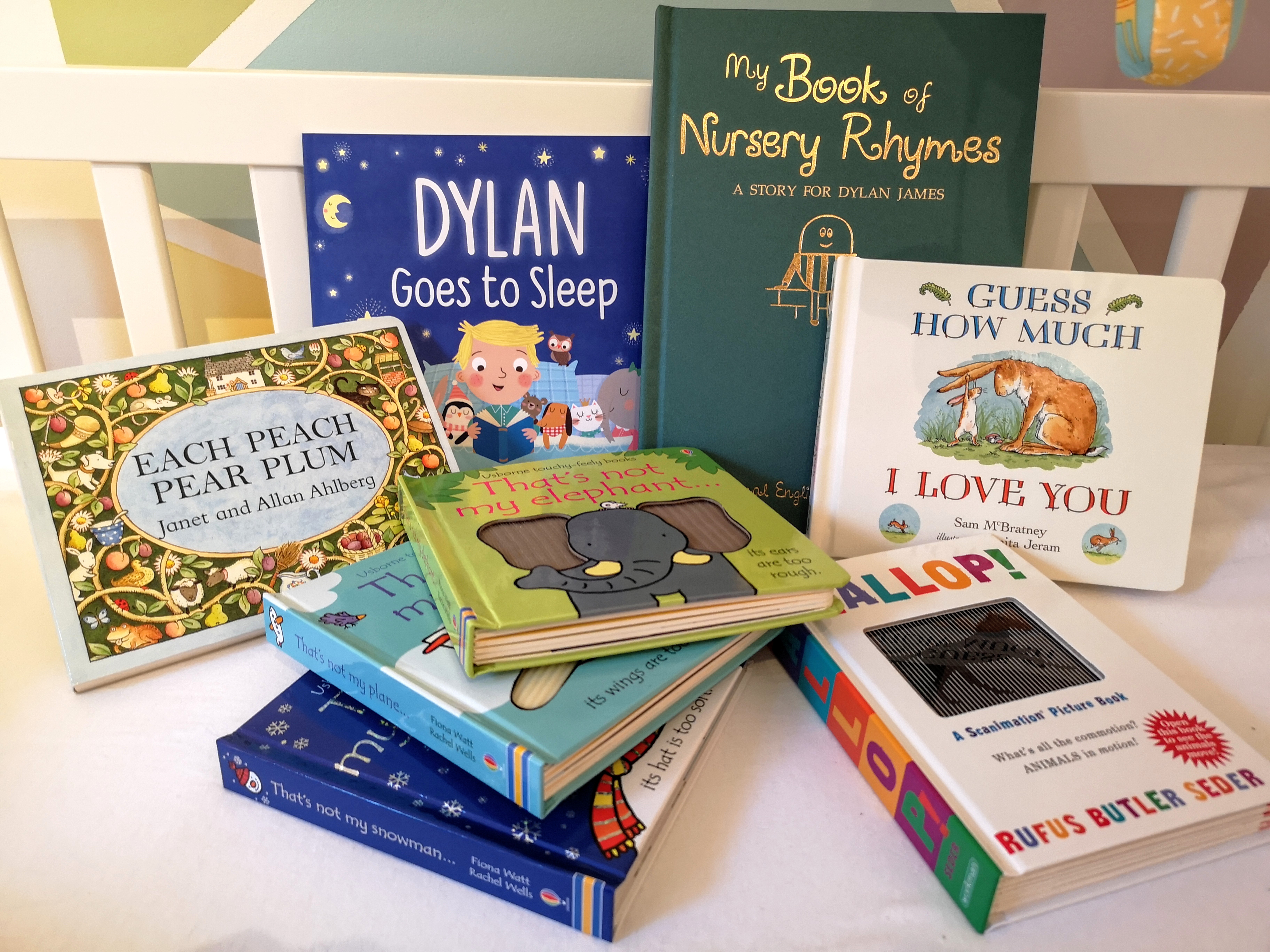